“…There is a factor to be taken into consideration in talking of the club’s future – the real pride all the people of all types in the town take in the club and what it stands for. Hastings and the Winkle Club have become inseparable terms. Folks all over Britain and indeed in many parts of the world, when the name of Hastings is mentioned, think at once of the Winkle Club – and say so. The club enshrines the true spirit of the true Hastingers, a community of souls who for a thousand years have wrung a living from the sea and held their heads high in so doing, a race of hardy men and women who through the Middle Ages and in Tudor times fought unsparingly for England and who, in the wider conflicts of modern times, have given their sons and daughters to the country without stint. They remain, as they always were, simple hard working people whose innate kindness is well expressed in the unflagging work for good causes accomplished by the club which they themselves called into being, so many years ago. Therein lies the best guarantee of permanence for the future of the Winkle Club and no doubt the great-grandsons of the present Hastings fisherfolk will be saying to one another, a hundred years ahead when they meet on the Stade, those familiar words – Winkle Up!”

From ‘Winkle Up!, The Story of the Hastings Winkle Club’ by Bill Dyer and Bill Vint. 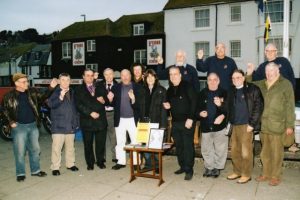 Sadly, once again due to Covid 19, we have reluctantly decided to postpone the annual supper. It will no longer take place on 7th January. Watch this space for further info and updates.