Prince Philip was made a member of the Hastings Winkle Club on the 28th October 1966 when he accompanied the Queen to our town and they had their luncheon in Hastings. He was presented with a Gold Winkle and the Club Secretary at the time, accompanied by the then Club Vice President, John Burton ( Grandfather of current Chairman, Christian Burton ), also gave him ‘an ordinary winkle’ saying: “Here you are Sir; one for week-days as well.”

Her Majesty The Queen had been presented with a gold winkle brooch when she visited Hastings as Princess Elizabeth in 1951.”

Prince Philip has remained an Honorary Member of the Winkle Club for 70 years now and I was privileged to meet him twice when Mayor of Hastings and also as Chairman of East Sussex County Council. I also saw him when accompanying the Queen at the late Queen Mother’s funeral which my wife and I attended.

The Winkle Club will be sending a letter of condolence to Her Majesty the Queen and the Club Flag will be flown at half mast on the day of the funeral.

As we all look forward to the end of lockdown and a return to some kind of normality, The Hastings Winkle Club is hoping for a year in which it is able to concentrate once more on its core aims and objectives.

Several applications have already been received by the Club requesting donations and all these will be considered carefully by the Club’s committee. Inevitably, however, in common with the whole charitable sector, fundraising has been negligible during the past year of enforced restrictions so the Club’s donations to strictly local good causes will be limited to smaller amounts than might normally be the case.

Nonetheless, the Winkle Club feels confident that it will be able to help a range of Hastings area community organisations and will begin looking at potential beneficiaries at the Club’s April ‘virtual’ committee meeting.

The Club received some national publicity recently as part of the fall out from the ‘Harry and Meghan’ interview with Oprah Winfrey. Two or three of the Club’s senior officers were ‘door-stepped’ by a tabloid journalist with a determination to produce a quirky yet critical article aimed at the Duke and Duchess of Sussex who have not yet been presented with the gold winkle and brooch especially bought for them. This jewellery was purchased thanks to the generosity of a few members and did not rely in any way on Winkle Club funds. Suffice to say that the Club  hopes that the presentation can still take place should the Duke and Duchess revisit Sussex in the future.

Spring is now officially with us and the Winkle Club has plans for a variety of Summer and Autumn events if all goes well. If you would like to learn more about our historic Club, please visit our website : winkleclub.org and donations can be sent to our H.Q. C/O East Hastings Sea Angling Association, The Stade, Hastings, TN34 3 FJ.

The historic 120 year old, Hastings Winkle Club which is based in the Old Town of Hastings has seen many of its fundraising plans being cancelled or at best postponed due to the Covid pandemic.

Along with many other charities, the Winkle Club has seen a sharp downturn in its income during this extraordinary year.

Nonetheless the Club still managed to make small donations to several local good causes as well as to The Friends of the Conquest Hospital, The Hastings Foodbank and Surviving Christmas.

On Winkle Island in Hastings Old Town, The Winkle Club installed  a Christmas Tree of Gratitude and Glad Tidings which they hope will bring good cheer to the whole community.

The Tree was both grown and the whole project organized by Winkle Club Stalwart and Old Town Carnival President, Bill Wicking who had the idea of decorating it with not only the traditional lights etc. but also with messages of gratitude to all who have helped our communities through this very difficult and challenging year.

Hastings Winkle Club Chairman, Christian Burton, said ‘ We hope that this ‘Christmas Tree of Thanks’ will brighten up  Christmas a little for all those who see it and be a public display of gratitude for the support network we all depend on in such difficult times.’

Winkle Club President, Richard Stevens, added ‘ Our Historic Club is run entirely by volunteers and this project shows the determination of our membership to continue its long tradition of helping local good causes and showing support for our community even as we all battle against the current crisis.’

The Club also plans to sing Christmas carols outside Old Hastings House Residential Home which is located at the top of the High Street, on Christmas Day with a socially-distanced Choir.

This is  another tradition which goes back some 40 years. The only difference this Christmas will be that the Winkle Choir will not be able to sing inside the building but residents will watch and hopefully hear the carol singing from their lounge windows.

Wreaths were laid and the 2 minutes silence observed. Only senior members of the club were permitted to attend in line with the current lockdown restrictions.

Chairman, Christian Burton, read the poems “In Flanders Fields the Poppies Blow” and “For the Fallen”

“In Flanders fields the poppies blow
Between the crosses, row on row,
That mark our place; and in the sky
The larks, still bravely singing, fly”
Scarce heard amid the guns below.”
JOHN McCRAE

“They shall grow not old, as we that are left grow old:
Age shall not weary them, nor the years condemn.
At the going down of the sun and in the morning
We will remember them.”

“When you go home, Tell them of us and say,
For their tomorrow, We gave our today.” 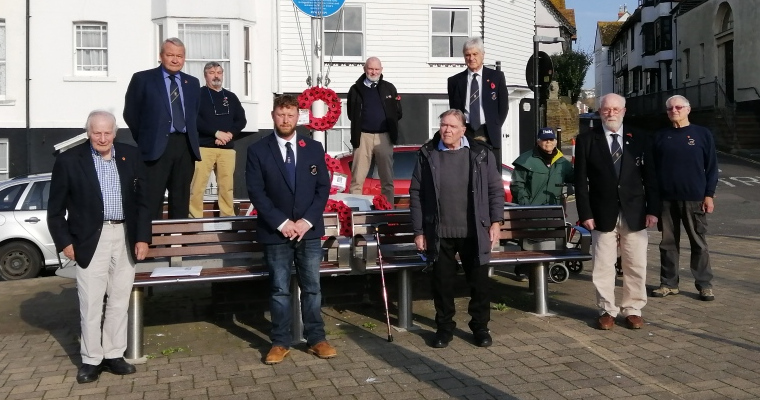 I hope you are keeping well in these difficult times. As you will appreciate up until this month the club has not been able to hold any functions or do any fundraising this year due to the current restrictions.

It was, therefore, a relief and a joy to be able to hold our annual crazy putting event during Hastings old town week. This was a fun event which raised around £300 for the charity.
Thanks to all members who took part.
As a result of the restrictions we have not been sending out our seasonal newsletters as there was very little to report.
However, I can give you an update of what has been going on behind the scenes.
You will be aware that our former President, Sir Kenneth Warren, sadly passed away in June 2019. A number of us attended his memorial service in St Margaret’s Church, Westminster Abbey on Thursday 30th January 2020.
A plaque has been made in his honour and this will be placed on one of the benches on Winkle Island in due course. Once we are able to hold a ceremony his family will be invited to attend along with Winkle club members.
I am very pleased to report that Richard Stevens has been elected as our new President.
After many years of loyal service, Ian Porter has stood down as our Treasurer. Having worked alongside Ian for the past few years I have seen how dedicated and diligent he has been in the post and we wish him well with his retirement.
Our new Treasurer is Roger Williams who has been a club member for over 40 years and a member of the committee. We wish him all the best.
Sadly we haven’t been able to hold our annual donations evening this year. The club have prioritised its donations to those most in need this year. A sum of £5000 was given to the Conquest hospital for the staffs welfare and £1000 was donated to the foodbank.Looking ahead we have booked our annual supper night for Friday 7th January and we are expecting the annual Children’s party to take place. We have also booked the music festival for 2021. Details to follow in due course.
We have had a number of new members wanting to join and we will be holding a mass induction as soon as possible.
The clubs future is looking bright and the committee, lead by our enthusiastic Chairman Christian Burton, are working hard to ensure the clubs proud 120 year history is continued.
Kind regards and Winkle up!